Harry Who? (A Tribute To Harry Warren) 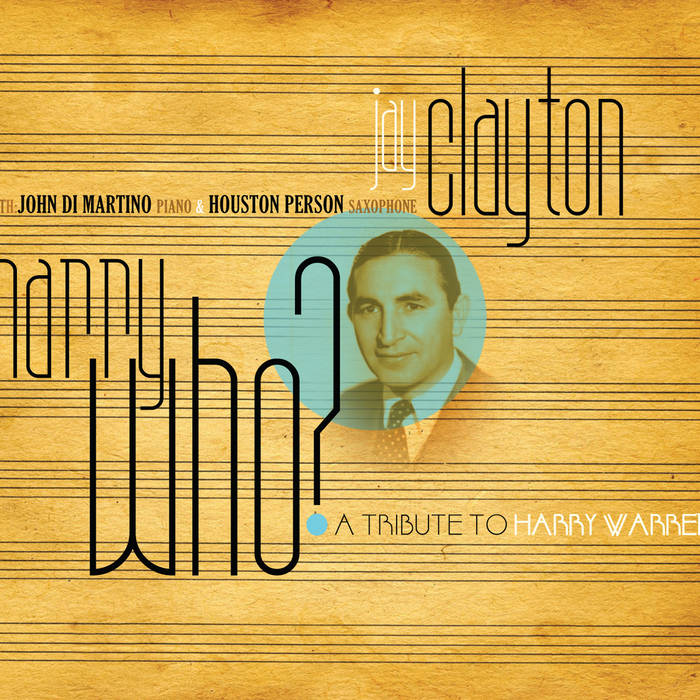 Vocalist Jay Clayton has long been at the forefront of innovation for voice in jazz and new music. Her knowledge of the jazz canon has occasionally been overlooked, however. Clayton has developed into an amazing interpreter of the American songbook and her new album Harry Who? (A Tribute to Harry Warren), featuring John DiMartino and Houston Person, is an intriguing addition to her eclectic catalog.

Early in her career, Clayton was taken by the songwriting of Harry Warren, an extremely talented composer who did not receive the recognition he deserved because of his writing for film scores rather than Broadway musicals. Warren was a self-taught musician and Italian-American who found success in the competitive world of musical composition for movie scores. He won a number of Academy Awards in the 1930s and 1940s, listeners finding he was equally adept at writing ballads to uptempo dance numbers.

Clayton has long felt an affinity for Warren as she shares a similar Italian-American heritage and has regularly performed “There Will Never Be Another You” throughout her career. When Warren passed away, she promised herself that one day she would dedicate an album of his compositions as a tribute.

The recording was done in collaboration with the great pianist John DiMartino, a tremendous accompanist and arranger. Clayton also insisted on having a saxophone as a contrasting voice to her own and enlisted the aid of the legendary tenor player Houston Person. Person has developed an extremely personal and rich style blended with an amazing knowledge of repertoire.

The recording begins with the poignant “I Wish I Knew,” balancing the three principal voices perfectly. “This Heart of Mine” is introduced with Clayton’s pointillistic scatting leading to a moving arrangement featuring DiMartino’s classy touch. “At Last” is a dramatic rendition of the evergreen composition while “September in the Rain” is ruminative and well paced. The soft “Shadow Waltz” is quirky with its attractive piano and whistling duet.

“This Is Always” shows Clayton’s ability to pull the subtle nuances from a piece. The dynamic contrasts of “You’re My Everything” highlight the rapport between the three performers. “You’ll Never Know” is a strolling, affecting duet between the vocalist and pianist. The unique arrangement “I Only Have Eyes for You” bring a new flair to this beloved classic. Concluding the recording, “There Will Never Be Another You” showcases both the reverential and exploratory sides of the jazz tradition with a tempered duet stretching into an improvisatory sojourn.

Two singular artists have been presented on this recording: the extraordinary songwriter Harry Warren and the truly singular vocalist Jay Clayton. On Harry Who?, Clayton has incorporated two superb accompanists, pianist John DiMartino and saxophonist Houston Person, to finely craft a heartfelt and moving musical tribute.

Bandcamp Daily  your guide to the world of Bandcamp