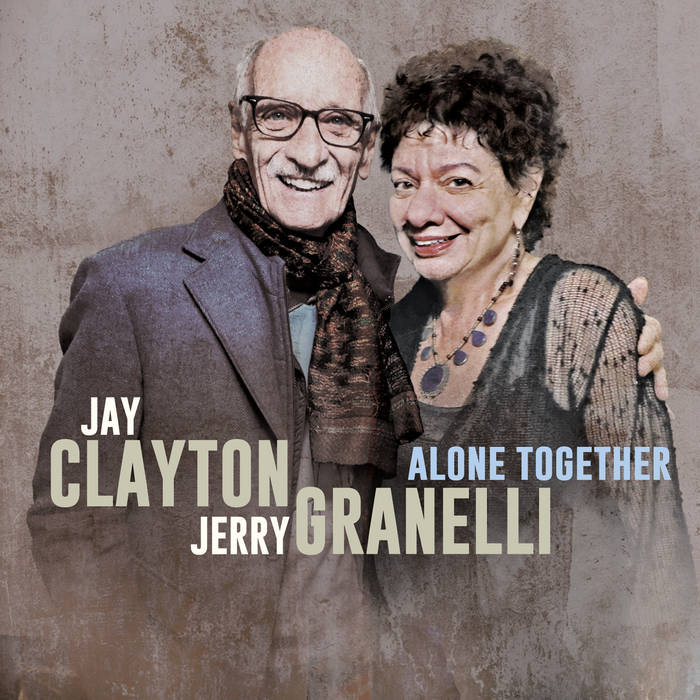 There are relationships that always remain fruitful. Maybe it is because the discourse never lags or there is unflagging affection. Vocalist Jay Clayton and percussionist Jerry Granelli have been making music together for forty years and their musical connection continues to surprise as their affinity deepens. Their new recording, Alone Together, shows how the spark of creativity has only brightened over the duo’s long affiliation.

Separately, the two have had remarkable and eclectic careers. Clayton came up as a jazz singer, only to be recruited into the modern classical worlds of Steve Reich and John Cage before becoming one of the great vocal improvisers in any genre. Granelli was a first call drummer in the Bay Area, playing regularly with piano greats Vince Guaraldi, Mose Allison, Denny Zeitlin and the guitar wizard Ralph Towner.

Clayton and Granelli’s relationship stemmed from a recommendation of the great percussionist Collin Walcott. Granelli was running the summer music program at the Naropa Institute in Boulder, Colorado, an important Buddhist institution where many important voices in creative arts and music came together. Walcott suggested that Granelli invite Clayton to their workshop in 1979.

Upon arriving, and having never met Granelli before, Clayton was asked to perform an improvised concert with Walcott and Granelli in a local planetarium. The rapport between Clayton and Granelli was immediate and deep. Clayton return to Naropa each of the following three summers. Then when Granelli relocated from the Bay Area to Seattle to teach at Cornish College, he invited Clayton to join the faculty.

The two really began to develop their language in Seattle. Meeting regularly in Granelli’s basement rehearsal space, the improvisers made a core sound that would drive many future projects, including their group Quartett, featuring trombonist Julian Priester and bassist Gary Peacock. But it was their connection that was the heart of these endeavors. They were true musical soul mates.

Their first foray into recording was a duo recording entitled Sound Songs that was released in 1986 on JMT Records from Germany. Apart from Charles Mingus’s “Goodbye Porkpie Hat,” the entire album was improvised, showcasing the captivating talents of these two masters as they created new music together.

Thirty years later, Clayton and Granelli have revisited the integral duo setting they perfected so long ago. They reconvened along with engineer Darren Von Niekerk at the Sonic Temple Studio in Halifax, Nova Scotia for three hours in July 2014. The music was later mixed and edited by longtime friend Sascha Von Oertzen.

Though there was no plan and all of the music was spontaneously created, Clayton did employ poetry from e e cummings, Naropa founder Anne Waldman and dancer Brenda Bufalino. They also utilize melodies from the great Ornette Coleman and the Tiomkin and Washington standard, “Wild Is The Wind.”

The recording begins with “Because It’s Spring” and Granelli’s haunting hand bells ringing in the herald of e e cummings’s words spoken and broken down by Clayton. Sharp percussion introduces the vocalist’s dramatic take of Waldman’s “Fast Speaking Woman,” the piece evolving with the addition of tuned tin and tuned drum to the cymbals and martial drums. Ornette Coleman’s “Lonely Woman” has long been a part of Clayton’s repertoire and the duo revisits the classic melody with a graceful vocal line over the ominous, rumbling drums. It was Granelli who prompted Clayton to begin her use of electronics, something that she still utilizes to amazing effect, as can be heard on “Swing Thing” as she uses a chorus pedal to double and triple her lines with a thoughtful dialog with the drums.

The duo’s take of “Wild Is The Wind” begins subtly with straight vocals and percussion rejoinders as Granelli develops ample opportunity to augment the story. Clayton introduces “Birds and Artists” with her unique vocal language, mimicking the sounds of birds, while Granelli strikes and rubs his cymbals for dark tones before Clayton reappears with Brenda Bufalino’s poem set against overdubbed wordless lines. Clayton’s effected vocals are featured again on “New Morning Blues,” a swinging number that allows the couple to slip into jazz mode. The program concludes with “Bells Too,” the ethereal blend of Granelli’s bells and Clayton’s lilting vocals float through another cummings poem.

The return of Jay Clayton and Jerry Granelli’s duo should be celebrated, as their work together has always been singularly expansive. Their brilliant Alone Together provides listeners with a chapter in their continuing narrative in sound exploration.

Bandcamp Daily  your guide to the world of Bandcamp

Guests include Kassa Overall and Muriel Grossman, plus an LP of the week by Van Hunt.